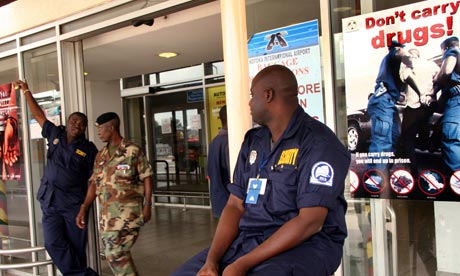 When an unidentified plane crashed into the desert in northern Mali in November 2009, it was immediately suspected of smuggling cocaine from Latin America. The west African route to the lucrative European markets had been growing in popularity for some time following successful anti-smuggling operations in the Caribbean.

But what was truly shocking about the mysterious unmarked, burned-out aircraft nearly 10 miles from a makeshift airstrip, was its size. The Boeing 727-200 was big enough to carry 10 tonnes of the drug. It was obvious the Colombian cartels were now plying the west African route on an industrial scale.

For the last two years the US and British governments have grown increasingly worried about this new front in the "war on drugs" and how African governments are struggling against corrupt officials and a lack of resources to respond, according to cables released last night from US embassies across west Africa.

They show in vivid detail how the coastal states and their inland neighbours have come close to being overwhelmed by the booming trade, while the prospect of al-Qaida and Hezbollah exploiting the region's UN-estimated $1.3bn (£800m)-a-year drug trade to fund terror, looms on the horizon. Ghana sits at the centre of the new cocaine-transit zone. In January this year, President John Atta Mills told Barack Obama's assistant secretary of state for African affairs, Johnnie Carson, that he fears "a bleak future for the Ghanaian people".

"Ghana is struggling with drug trafficking and increased drug use," he said, adding that traditionally God-fearing Ghana is "becoming a user country".

But governments such as Atta's are coming under growing scrutiny themselves. A rash of new mansions has sprung up in Ghana on the back of the oil wealth, leading to questions about the failure of official oversight of ill-gotten gains.

Yaw Akrasi Sarpong, executive secretary of Ghana's narcotics control board (Nacob), asked "how $700,000 mansions could be built in the poor region adjacent to the main Ghana-Togo border crossing … how a single Nigerian woman could buy large parcels of beachfront property but thatno one questions the source of her funds."

During a meeting with embassy political officers, Sarpong "made disparaging categorical remarks about drug connections in the former New Patriotic party government, now the opposition [and the influence on politics of money derived from drug trafficking]", and privately criticised the government, saying it had "failed so far to provide Nacob with adequate resources, and stressed that low salaries make law enforcement personnel highly vulnerable to drug traffickers".

His view of airport customs was particularly scathing, remarking that "in addition to the individual mules who ingest small quantities of drugs or conceal the drugs in luggage or body cavities, airport workers have been arrested 'for passing drugs to travellers after they have completed security' and that drugs are smuggled out of the airport through the 'VVIP' (very very important person) lounge.

The US view is similarly critical, with the Accra embassy concluding in 2009 that the Ghanaian authorities direct "little or no effort … at pursuing mid- and higher-level traffickers or ringleaders" and blaming "Ghana's open business climate" for providing cover for drug trafficking rings which even the Ghanains admit are "growing in their strength and capacity".

At a London meeting, senior British FO official on Africa, Janet Douglas, warned the US principal deputy assistant secretary of state for Africa, Phillip Carter, that the drugs trade and other criminal activities in west Africa were "becoming institutionalised" .

She said: "It was important to stymie the drug trade … before it destabilises the region further, and before terrorists begin using it as a source of revenue." It may be too late, according to the President of Mali,Amadou Toumani Touré, who "directly linked revenues from drug trafficking to terrorism" in a December 2009 meeting with General William "Kip" Ward, head of the US military's Africa command.

Cables from Freetown, the capital of Sierra Leone, show that tribal members of parliament, police officers and members of the armed forces are all suspected of being involved in large-scale marijuana farming operations.

"The proliferation of marijuana cultivation is being viewed as a national security threat," a secret cable back to Washington in July 2009 reports. "As the country's most valuable cash crop, marijuana production is increasing to the detriment of subsistence farming. In Moyamba district, for example, intelligence reports suggest that individual marijuana farms span between 5 and 12 square miles. Local unit commanders feel powerless to stop the cultivation."

The embassy said there were reasons to be hopeful that Sierra Leone is trying to tackle the drugs trade, but warned "senior members of the government have profited from the drug trade and have a vested interest in slowing co-operation".

Unnamed Belgian, Belorussian and Dutch nationals are suspected of involvement in cocaine smuggling and Sierra Leone "remains an easy place for intelligent, well-funded criminals to set up shop and take advantage of the country's overall destitution".

In both Ghana and Sierra Leone, there is evidence that Britain's Serious and Organised Crime Agency has struggled to have an impact. John King, a Soca officer based in the Nigerian capital, Lagos, told the Americans how the Ghanaians failed to act on intelligence it provided in 2007 about a cocaine boat coming in from south America and did not intercept it.He also found the then minister of interior, Albert Kan-Dapaah, "dismissive and irritated" when he raised problems with narcotics at the airport.

Meanwhile, police in Sierra Leone "privately indicated their frustration with Soca's intense presence and direction" during a recent major cocaine investigation, "noting that their interest seemingly disappeared as soon as the case ended". Soca's treatment of the case made the Sierra Leoneans more likely to turn to the US for help in the future, the cable revealed.

The fear of high-level political involvement in narcotics became clear in August 2008 when a trafficker, suspected of smuggling 750kg of cocaine, reportedly fled Sierra Leone into Guinea "under protection"provided by the convoy of the president of Guinea's wife. Sierra Leone's president, Ernest Bai Koroma, wanted US help tracking down Gibrilla Kamara, because he thought making the request directly to the Guinean president Lansana Conté would lead to his inner-circle tipping off the trafficker.

Kamara was suspected of travelling in the same convoy as Conté's wife, Zainab. The cable said she was stopped in a convoy of three cars with hundreds of thousands of dollars, euros and gold bullion.

Back in the wilderness of northern Mali, where the mystery plane crashed, the US is worried about the volatile mix of large shipments of cocaine, tribal conflicts and international terrorist groups.

The mystery of where the plane's cargo went is further deepened by the revelation in a secret cable from February this year that Mali's civil aviation authority was prevented from investigating the crash until more than three weeks later and neither were the drug unit of Mali's investigative police allowed to make inquiries. The whole investigation was kept within Mali's secret intelligence service.

It details a reprisal kidnapping of a tribal chief following an ambush on a drug caravan in the Kidal region in January. The caravan was manned by Telemsi Arabs and Imghad Tuaregs and comprised five trucks with mounted automatic weapons carrying cocaine, the estimated quantitaties of which vary from several kilograms to several tonnes. It was attacked by rival Kounta Arabs and Ifhogas Tuaregs, who have been the traditional leaders of Arab and Tuareg communities in the region.

The cable warns that the flashpoint could "leave the confines of proxy battles via smuggling and elections and enter the realm of outright war". Ebola: le Sénégal réouvre sa frontière avec la Guinée
Communiqué de presse - FRANCAFRIQUE
Guinée : Dalein ou le choix de l’opposition
Commenter cet article
R
replica watches uk
20/01/2015 07:47
I would like to thank you for the efforts you have made in writing this article.
Répondre
H
hublot replica
20/01/2015 07:47
Very good stuff with good ideas and concepts, lots of great information and inspiration, both of which we all need.
Répondre
G
gucci replica
20/01/2015 07:47
Pretty good post. I just stumbled upon your blog and wanted to say that I have really enjoyed reading your blog posts.
Répondre
Newsletter
Suivez-moi
Recherche
GUINEEWEB.ORG